If you love the Wild Wild West, you'll love this steamy hot historical set in the Montana Territory!

Emma James felt secure in her life. Money, social standing and the protection of her step-brother. Or so she thought. When she discovers his dark secrets, he turns on her and sells her to a western brothel to keep her quiet. There, she's forced to work or participate in an auction. A virgin auction...and she's the prize.

One look at Emma James and Whitmore Kane and Ian Stewart know she would belong to them. Marriage was the only way to truly claim her...so they bid and bid well. As their bride, they return to the Bridgewater Ranch and teach her the ways to please not one husband, but two. But danger has tracked Ian around the world and threatens their newfound relationship. Together, can they fight the demons of the past while forging a future?

This is the first book in the Bridgewater Ménage Series, where you'll meet all of the men in Kane and Ian's army regiment and discover their unusual beliefs on marriage. Read the entire series to follow along as the men, two or three at a time, claim their brides.

If you like Lexi Blake's Virgin series, you'll love Bridgewater! 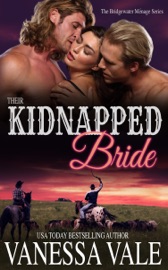