“The holy grail for disillusioned cycling fans . . . The book’s power is in the collective details, all strung together in a story that is told with such clear-eyed conviction that you never doubt its veracity. . . . The Secret Race isn’t just a game changer for the Lance Armstrong myth. It’s the game ender.”—Outside

The Secret Race is the book that rocked the world of professional cycling—and exposed, at long last, the doping culture surrounding the sport and its most iconic rider, Lance Armstrong. Former Olympic gold medalist Tyler Hamilton was once one of the world’s top-ranked cyclists—and a member of Lance Armstrong’s inner circle. Over the course of two years, New York Times bestselling author Daniel Coyle conducted more than two hundred hours of interviews with Hamilton and spoke with numerous teammates, rivals, and friends. The result is an explosive page-turner of a book that takes us deep inside a shadowy, fascinating, and surreal world of unscrupulous doctors, anything-goes team directors, and athletes so relentlessly driven to win that they would do almost anything to gain an edge. For the first time, Hamilton recounts his own battle with depression and tells the story of his complicated relationship with Lance Armstrong. This edition features a new Afterword, in which the authors reflect on the developments within the sport, and involving Armstrong, over the past year. The Secret Race is a courageous, groundbreaking act of witness from a man who is as determined to reveal the hard truth about his sport as he once was to win the Tour de France.

With a new Afterword by the authors.

“Loaded with bombshells and revelations.”—VeloNews

“ ‘If I cheated, how did I get away with it?’ That question, posed to SI by Lance Armstrong five years ago, has never been answered more definitively than it is in Tyler Hamilton’s new book.”—Sports Illustrated 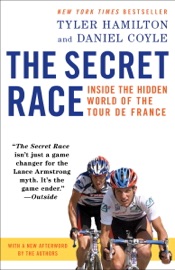