*Perfect for ages 7-9
*Includes pictures .
*Includes oral legends about Sitting Bull, Crazy Horse and the Sioux.
*Explains the Battle of the Little Bighorn.

In Charles River Editors’ History for Kids series, your children can learn about history’s most important people and events in an easy, entertaining, and educational way. Pictures help bring the story to life, and the concise but comprehensive book will keep your kid’s attention all the way to the end.

Like Geronimo in the Southwest during the same era, Sitting Bull and Crazy Horse were warriors and leaders of different groups of Lakota (Sioux) who fought in several skirmishes against settlers and U.S. forces across the Plains during the 1860s and 1870s. Admired by their own people for their kindness and strong leadership, reviled by their enemies for their defiance, when The Great Sioux War of 1876 began, Sitting Bull and Crazy Horse were two of the most important leaders among all Native American tribes on the Plains, and they were the ones to turn to for those who intended to keep fighting whites.

Sitting Bull and Crazy Horse were hardly the only Native Americans fighting the U.S. Army at the time, but they became legends at the Battle of the Little Bighorn, during which an estimated 2,000 Lakota and Cheyenne warriors led by Crazy Horse and inspired by one of Sitting Bull's visions routed and then annihilated the 7th U.S. Cavalry led by George Custer. That disaster led the American government to double down on its efforts to “pacify” the Sioux, and by the end of the decade many of them had surrendered and been moved onto a reservation. Crazy Horse kept fighting for a year before surrendering, and Sitting Bull defiantly refused to surrender, instead heading with a smaller band into Canada and remaining exiled.

When they finally did surrender, and the threat they posed eliminated, Americans viewed the two Native Americans as celebrities. Sitting Bull even went on to appear in Buffalo Bill Cody’s Wild West Show during the 1880s. However, the two Lakota leaders would be connected in one more way: death. The deaths of both Sitting Bull and Crazy Horse took place on reservations and remain controversial to this day.

History for Kids: The Illustrated Lives of Sitting Bull and Crazy Horse chronicles the amazing lives of the Sioux leaders who defiantly fought to save their people’s homeland, but it also humanizes the men who became two of the most famous Native Americans in American history. Along with pictures of important people, places, and events, your kids will learn about Sitting Bull and Crazy Horse like never before. 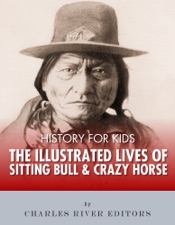